Product of the American melting pot

This is the story of how we acquired our third dog, Jepp.  A friend of mine had just gotten a Boston Terrier, and he was a neat looking little guy… they describe his coat as reverse or maximum brindle, meaning he was mostly dark with some light stripes thrown in.  He looks kind of like this: As soon as the wife saw him, she fell in love, and was back on the hunt for the ever elusive lap dog that she had been wanting.  I thought the Boston was a cool looking dude, so I agreed.  We caught wind that there was a female Boston Terrier, with a regular brindle coat available at a pet store close to us.  We stopped by, but the Boston was long gone, someone had bought her hours before we got there.  However there was a little tiny black puppy alone in a crate, and the wife thought he looked so sad she just had to ask to see him, when they brought him out she fell in love and had to have him.  They told us he was Rat Terrier and Chihuahua, and he was so little we figured he was going to stay that way.  This is him the day we brought him home, he would fit in the palm of my hand: Huckleberry wasn’t quite sure what to do with him, but Jemma took to him right away…. much like with Huckleberry, I think she thought she was his mother.  It is also because of her that he thinks he is a much larger dog than he actually his, because she artificially inflates his ego during play time.  She is also his protector, I think she might fight to the death for him.  Whenever she isn’t around, he is a giant wuss that is scared of everything, but with her by his side he thinks he can take on the world.

In the end, the joke was on my wife though, because even this one isn’t her lap dog.  He’ll sit with her occasionally, but 99% of the time, he is wherever Jemma is.  Which usually means that he has shoehorned himself between her and my leg on the couch.  I also think he might be scared of heights, even though we’ve never dropped him, and we always support all 4 feet, he hates to be picked up.  He also hates change, if we take him with us on a trip he might not eat for days… but something as minor as moving a piece of furniture in the house can get that same response… he’s definitely a weirdo.

He’s also probably our smartest dog, he learned nearly everything by example.  He was house trained in no time, he learned lay down without even really trying to teach him… I’ve also taught him to shake hands, high five, and fist bump.  He also serves as the lookout for the other two when they’re up to no good.  We had a real problem for a little while with them just straight up ripping pickets off of our wooden fence and escaping.  It took a long time for me to finally catch them in the act and see how they were doing it…. total team work.  Huckleberry would dig under the picket a bit and then get his longer nose in there and grab and start to pull back, then Jemma would latch on and use her brute strength to just rip it right off the fence.  Meanwhile Jepp would be hanging back and listening next to the back door… if one of us would get close to the door, or lift up a window shade, he would bark a warning and the others would stop what they were doing and look like innocent little angels.  He would also do the same while the other two tunneled under the fence to freedom as well.  I tried everything in the world to break them of it… even burying chicken wire wouldn’t work, the Beagle would just chew through it!  The final solution ended up being to line the entire bottom edge of the fence with railroad ties all the way around the yard.  That was a fun weekend.

Some of you may have noticed a theme with our dog names by now… Huckleberry was named for the cartoon Huckleberry Hound.  Jemma already had her name when we got her, but it just so happened that we were big fans of Sons of Anarchy, and the mother on the show played by Katie Sagal shares that same name.  When it came time to pick a name for the little guy, we were watching an episode of Duck Dynasty, hence Jepp.

He’s coming up on 4 years old, and now that he is fully grown, I really don’t think he is Rat Terrier/Chihuahua like the store told us.  I really think he is more Miniature Pinscher than anything else, maybe with a bit of Chihuahua thrown in.  He went through a phase for awhile there where his ears stood straight up, and he was pretty goofy looking, I’m glad they finally decided to flop over in the end.  He did get bigger than we thought as well… he only weighs around 15-17 pounds, but he has very long legs. 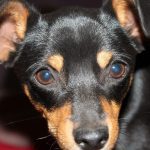 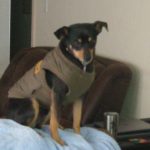 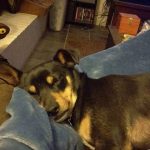 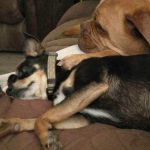