I have mentioned previously that I have three dogs, I thought I would take a little bit of time and introduce the first one in this post.  I grew up with a dog, one of those super vicious man eating pit bulls.  She was so vicious that I used to ride her around like a horse while using her ears for reigns, she used to chase cats around the yard and once she caught them…. do absolutely nothing except try and get them to run some more so she could resume the chase.  Once a bird even fell down the chimney and got loose in the house and she caught it in her mouth, took it outside, and let it go.  So that was my entire foundation with dogs.

Back in 2011, I was dating my wife to be, and she mentioned wanting a lap dog.  She had just recently moved in with me, and we had a house and a good sized back yard, so I thought sure… why not?  Of course, my belief is that any dog that weighs less than 10 pounds is a cat, so I did not want a “traditional” lap dog.  You know what I mean, your standard chihuahua, yorkie, toy anything… etc.  So in doing some research, I convinced her that we needed a Beagle… and she went along with the idea.  My thoughts were… they only get to be around 20 pounds, so could serve as her lap dog, yet at the same time wouldn’t be a ridiculous girly dog that would need some kind of constant grooming and that I wouldn’t want to be seen in public with.

So the next thing you know, we have a Beagle… and when we showed up to get him, he seemed awfully big for a puppy…. that’s when the breeder let us know that his sire was “a chunk” and he seemed to be taking after daddy.  I think that’s a technical term widely used in Beagle breeding.

This picture was taken shortly after we got him: Here you can see him with his favorite toy: He just seems like the perfect little angel doesn’t he?  Yeah, well… looks can be deceiving… but more on that later.  First things first, he needed a name…. we kept going back on forth on that… finally I had the idea to name him Huckleberry, after the Huckleberry Hound cartoon… he was, after all, a hound dog.

It was at this point that we started to get an education on Beagles… things that we had never run across while researching the breed, but seemed to find in abundance after the fact.  The first being that his nose rules his life… I knew Beagles were scent hounds, but you just really don’t appreciate the fact until you’ve dealt with one.  It’s like he has olfactory ADHD.  If we’re just out for a walk, he’s constantly trying to go in 47 different directions to smell things.  At the same time, he has the ability to focus in razor sharp on something as well, like in the case of a strange person being in his back yard.  I’ve let him out of the house and watched him follow a trail where a plumber or yard maintenance person has walked with absolute precision.

The second thing we figured out real quick was that he is food motivated.  Now, most dogs are food motivated, but not like this.  I think he might walk through fire, jump off a cliff, or flap his ears hard and fast enough to actually take flight if he thought there was some food payoff in the end.  On the other hand, he won’t do a damn thing for you if there is no food involved.  For example, I’ve taught him to shake hands… but you can bet your life he isn’t going to do it if you aren’t holding a treat in the other hand.

The final issue, which is really kind of related to number two, is that I think he’s actually a billy goat in disguise.  If it will fit in his mouth, he’s going to try to eat it.  I don’t know how we haven’t ended up in emergency surgery trying to remove something from his belly up till now.  Most dogs do that as puppies… they’re exploring etc… most of them outgrow it.  Not this one, as discussed in this post, we have to make sure the floor is clear of everything and confine him to an area where we can monitor anytime he’s in the house.  One time, unbeknownst to us, he manged to eat an entire 2XL T-shirt.  The whole thing, the only reason we know this is because we found it in the yard where he had passed it… he digested a T-shirt people!

He also has a highly advanced skill set related to camouflage, believe it or not, there are actually TWO dogs in this picture: So, while we love him, and would never get rid of him… we will never own another Beagle, you can take that to the bank.

Here he is all grown up, he has ended up weighing in at around 30-35 lbs, much bigger than your average Beagle (much to the chagrin of my wife, as he is a bit big to be in her lap… though he still climbs in there occasionally).  He is also very much a loaner though, he might want you to pet him for a few minutes but then he wanders off to go lay by himself.  One thing I’m thankful he never started doing that Beagles are apparently notorious for is baying, he’s really pretty quiet for the most part… he’ll bark some, but never any baying and/or howling.  He also rules the roost, he is the pack leader when it comes to the other dogs.  I really thought my Dogue de Bordeaux would have that role, but I guess he was the first one in the house, and he wasn’t gonna let her take it. 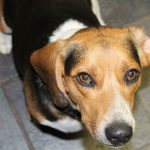 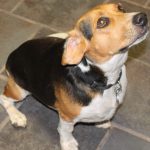 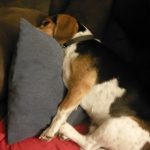 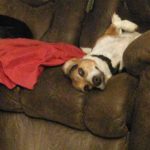 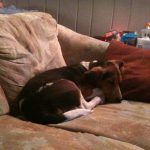 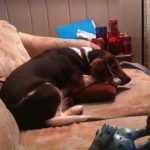